Post card view of Big Indian. Balsam Mountain is in the distance.
This card is from my collection which I found in St Joseph, Michigan.

Much of our Catskill Mountain WebSite was written over 20 years ago. A lot has happened with rail rides, tourist trains, etc. We will be updating shortly.

New York Central’s Catskill Mountain Branch (originally the Ulster & Delaware, bought by NYC in 1932) ran from Rondout (Kingston Waterfront) to Oneonta, with a branch from Phoenicia over Stony Clove Notch to Hunter and Kaaterskill.

The Hunter and Kaaterskill branches were abandoned by NYC in 1940.

The main line was cut back to Bloomville by NYC in 1965.

It lasted through Penn Central, and operated for about 6 months under Conrail, then was entirely abandoned in 1976.

The Trolley Museum operates the Rondout portion; track and possible bridge issues have prevented regular operation up the grade west of their main building. They are attempting to address the problems, but it ain’t cheap or easy.

There is rail in place on virtually the entire right of way through Ulster County, but there are plenty of washouts, and no tie replacements for 30 years means almost everything has to be completely rebuilt before any operation. Catskill Mountain RR has a lease on this whole portion. They have operated for many years from Mt. Pleasant to just west of Phoenicia; after years of trying, they have finally got permission to cross Rt 28 at Mt Pleasant, and hope to operate an additional 4 or so miles this summer to Cold Brook, near Boiceville, where a bridge problem will stop them for now.

West of Phoenicia, the Woodland Valley Creek bridge was indeed washed out several years ago, and subsequently removed by the Ulster County Highway Dept, who feared it would get carried into one of their road bridges by the next flood.

Delaware & Ulster Rail Ride operates from their Arkville base both east to Highmount, and west to Roxbury. Rails between Roxbury and Grand Gorge were indeed removed for sewer and water mains, but this has a major silver lining: The right-of-way deal required the town to regrade afterwards in a way suitable for tracklaying, and restoration of this stretch definitely remains on the DURR agenda. Biggest problem is engineering a new highway crossing just west of Roxbury, where the old highway overpass was removed and the highway laid on the old right-of-way — tricky, but probably possible. That, and money.

A few miles from Oneonta east was operated as a tourist line by the Delaware & Otsego in the late 1960’s, until condemned by the building of I-88 – this is where Walter Rich got his start in railroading. It’s probably forever gone because of the Interstate, and restoring a through route to Oneonta would be extremely difficult.

A few of us real dreamers would like to restore the whole thing from Kingston as far as West Davenport, and connect there with the old Cooperstown & Charlotte Valley (most of the grade still extant), to the modern day CACV tourist line, for through service from Kingston to Cooperstown. (There’s a highway underpass under I-88 in almost the right place, that would have room to sneak a railroad through.) THERE would be a tourist line! Only $80 – $100 million, a drop in the bucket if we can get some unified support together behind it — Ulster County is spending that much just on a new jail! 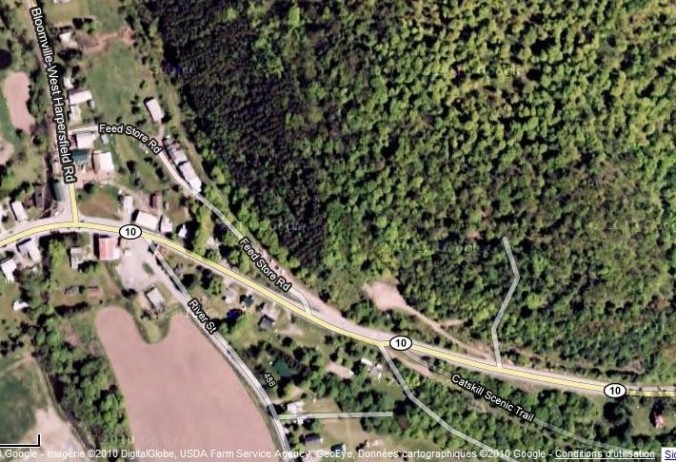 Bloomville: End of the Line….Sort Of!

The Catskill Mountain railroad was built in stages and later abandoned in stages. In 1870 it only ran to Shandaken, by 1872 it reached Roxbury and made it to Stamford by 1875. Hobart was reached in 1884. Bloomville became the end of the line in 1891. Oneonta, the final goal, was reached in 1900. In 1965, the 21 miles from Oneonta to Bloomville were abandoned first. Regular service after 1965 only extended to Stamford, with service to South Kortright and Bloomville only on an “as needed” basis.

A feed store at Bloomville which was owned by GLF, later The Catskill Mountain railroad was built in stages and later abandoned in stages. In 1870 it only ran to Shandaken, by 1872 it reached Roxbury and made it to Stamford by 1875. Hobart was reached in 1884. Bloomville became the end of the line in 1891. Oneonta, the final goal, was reached in 1900. In 1965, the 21 miles from Oneonta to Bloomville were abandoned first. Regular service after 1965 only extended to Stamford, with service to South Kortright and Bloomville only on an “as needed” basis. 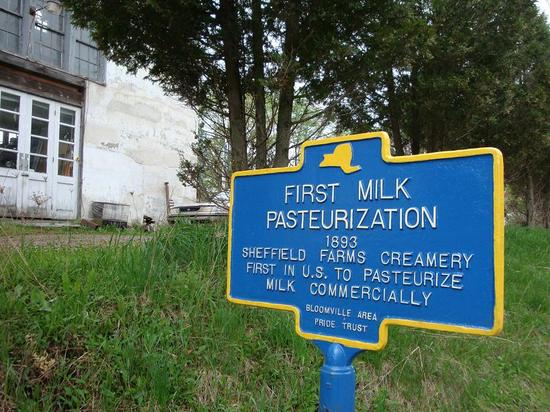 Bloomville: Sort of Famous Creamery
The Bloomville Creamery even had a bit of noteriety! Not only that, they made those New York State markers there too. As well as the creamery and sign company, Bloomville had a turntable, station, feed mill and passing tracks! Check out an old U&D employee timetable. This site is interesting too.

This system runs throughout the Catskill Mountains.

In 1842, Croton water arrived in the city, superseded the use of springs in Manhattan.
1927 saw the completion of the Catskill system plus city tunnel #1
1965 marked completion of the Delaware reservoir system
Today there are three watersheds: Croton, Catskil, Delaware; covering 2000 sq miles.
The system consists of 18 reservoirs
Three tunnels connect the city to the reservoirs (3rd tunnel under construction)
Water takes about 1 day to reach the city (flow velocity: 5 miles/h)

Throughout this century, the New York City water supply system has been the envy of virtually all major drinking water supply systems around the country and throughout the world. This system is one of the engineering marvels of the modern world. Ninety-seven percent of the water supplied to the city travels by gravity, meaning changes in electrical energy costs do not affect the cost of water. The supply tunnels and aqueducts that feed water to New York City are amazing in themselves. 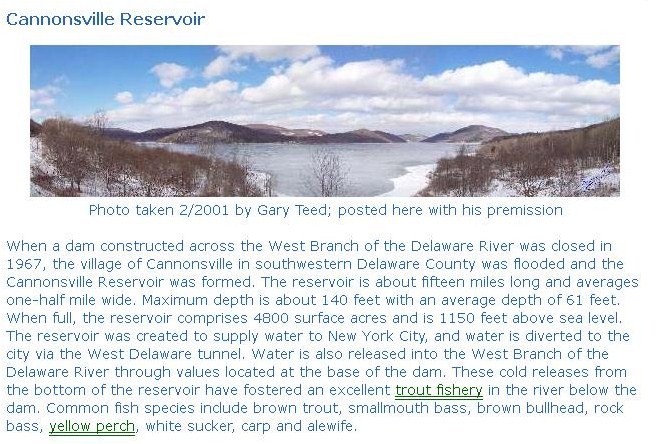 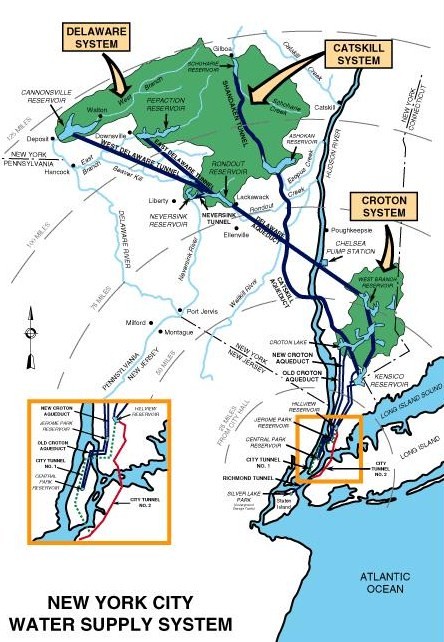 The NYC controlled the Big Four and the Michigan Central though majority stock ownership, but up to 1930 the companies were operated as separate railroads. NYC wanted to lease the properties and operate them as part of the New York Central System, essentially a merger but not an outright purchase.

The ICC appears to have approved the leases contingent on NYC also purchasing or in some way assuring continued operation of the Ulster and Delaware. The CCC&StL and MC leases became effective early in 1930, but there was considerable difference between the offering and asking price for the U&D. Finally the U&D trustee and the NYC agreed on $2,500,000.00, the amount recommended by an arbitrator for the ICC, and the deal was effective on Feb. 1, 1932.

Remember, at that time the U&D was a Class I Railroad!! The criteria for inclusion in that exalted category were much lower in 1932.

The rest of the story, related by Gerry Best in his U&D book and which corresponds with records I have seen, is the nasty little “secret.” Apparently, the U&D had a funded debt represented by a series of mortgage bonds, and there was a sinking fund of cash that would have been adequate to redeem the bonds on maturity. The cash is said to have come largely from transactions and settlements with the City of New York over takings and delays associated with construction of the Esopus Reservoir.

It appears that the Coykendall family, almost the only stockholders of the U&D, decided to take the sinking fund and use it instead for one whopping dividend in the middle 1920’s. They essentially stripped the railroad of its cash. Revenues were dropping and expenses were climbing, so they probably decided to bail out while the money was still there. The bonds missed a payment and lost their value, and thus ensued the mechinations with the receivership and sale.

Lawsuits continued, and eventually the creditors did fairly well considering the depression.

Another great contribution from Gordon Davids

The Wallkill Valley wayfreight made a round trip 6 days per week to Campbell Hall, with some local traffic (like cattle feed) and a lot of empties to interchange to the New Haven. Sometime he handled more than 50-60 cars to Campbell Hall.

The Catskill Mountain Branch wayfreight ran to Oneonta Monday, Wednesday and Friday, and returned the next day. Sometimes he had 30-40 cars, mostly cattle feed, for stations west of Arkville. Very little interchange at Oneonta with the D&H – usually a few loads of anthracite for local stations, and an occasional car of house freight or Cadillacs for Oneonta.

The Catskill Mountain Branch Yard Engine worked the former U&D yard, and spent all day, six days per week, serving local industries with all sorts of stuff in 1955. The track to the Colonial Sand and Gravel Co. cement mill hadn’t been built yet (1958) but when it started up it took 20-35 cars of bituminous coal per day from the CMB Yard job. The West Shore crews also had a Kingston yard engine that served local industries as well as switching in the yard.

There were north end and south end drop trains running on the West Shore main out of Kingston, and the Alsen Switcher out of Kingston was good for 40-60 cars of cement and coal on a good day.

Gordon Davids tells a great story about snow plows on the branch:

I don’t think they were randomly selected from power on hand at Kingston, and they might have come from Selkirk for that assignment. That job was set up as a trip to “Terra Incognita,” with two complete train crews. They had the plow (if forget the number, but it was a right-handed double-track Russel plow – big mistake – the two engines, the Kingston flanger and two cabeese. I’m pretty sure that they were particular to give it the best power they had available, because the operation was sponsored by A.E. Perlman himself in response to requests by several high-ranking New York State politicians to provide for the starving cows.

The plow and the 8000 derailed trying to push snow up the wrong side of a side hill cut behind the Blue Silo Farm between South Gilboa and Stamford. The cut had drifted full after they opened it the night before. I worked my first day for the New York Central, February 21, 1958, on the Oneonta Section Gang shoveling out the plow and the engine.

After that, the 8000’s ran to Oneonta on very rare occasions for several years, and then they became more common. By the way, when the plow derailed, they brought up the Selkirk wreckers to rerail it with the X-21 crane. That train had two FA-1’s on it, lead by the 1032. According to scuttlebutt at the time, that was the first time the CMB had ever seen a cab unit. They also pushed a Jordan spreader, and they had to re-open the track from Grand Gorge to the wreck before they could go back to Grand Gorge and get the crane.