Watch for some of these folks in our biographies 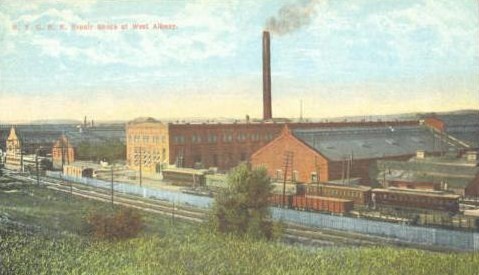 Between 1853 and 1869, the following railroads were merged into the New York Central:
Buffalo & Niagara Falls Railroad Co.

In 1869 the New York Central and the Hudson River Railroad were merged.

It took until the 1960’s before the Annual Meeting of the New York Central was held anyplace but Albany, New York (the official headquarters of the corporation).

Agreement of consolidation of:

THE TERMINAL RAILWAY OF BUFFALO

into THE NEW YORK CENTRAL RAILROAD COMPANY
THE CORPORATION SHALL CONTIUNUE FOR FIFTY YEARS
The number of directors who shall manage its affairs shall be fifteen.

While the original New York Central was developing in the East. The next move for the railroad to expand was developing to the West of Buffalo. Read more about the many railroads that became the Lake Shore & Michigan Southern.

July 2, 1831 First test of the “Dewitt Clinton” on the Mohawk & Hudson Railroad.

August 9, 1831 The “DeWitt Clinton” makes its first regular run on the Mohawk & Hudson (later NYC) between Albany and Schenectady. The original M&H ROW is currently in service from the curve near Rensselaer Lake to roughly CP 156 (Carman cutoff), operated by Amtrak and CSX. On the Albany side, east of the curve a couple locations exist where it still can be seen one at the Fuller Road exit of I90 and others on the SUNY campus and adjacent properties. The location of the Albany plane in in a hollow but could observe nothing of the former rairoad. On the SDY side, the plane was on the location Crane street, from the end of Chrisler Ave. The area of SDY in Mount Pleasant called “engine hill” for the engine of the incline plane. Do a google map search; the long tangent between Albany and Schenectady is the original ROW. PKL

June 13, 1845 The Troy & Greenbush Railroad opens between Troy and Greenbush, NY. It is the last link in an all-rail line between Boston and Buffalo.

May 12, 1846 The Hudson River Railroad is incorporated with the goal of building a line from New York City to Albany.

1857 The New York Central and the Hudson River Railroads begin operating a “Lightning Train” between New York City and Buffalo in 15 hours, or an average of 40 MPH.

1857 The New York Central and the Hudson River Railroads begin operating a “Lightning Train” between New York City and Buffalo in 15 hours, or an average of 40 MPH.

May 8, 1858 The New York Central provides a sleeping car on overnight trains between Albany and Buffalo NY.

1886, the Utica & Black River railroad was purchased by the Rome Watertown & Ogdensburg Railroad.