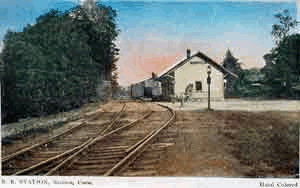 The Shepaug Valley Railroad ran from Bethel through Hawleyville, where it could transfer with the Housatonic, through Washington and Roxbury ending at Litchfield.

It was constructed in 1872 and was 32 miles long. It hauled ice from Bantam Lake and quarried stone from Roxbury that was used to build the Brooklyn Bridge. It also ran two passenger train a day at the turn of the century but the service was terminated in the 1930’s. The travel time for the line from Bethel to Litchfield was about two hours.

The Shepaug Line was leased to the New Haven from 1892 to 1947 when the company petitioned to discontinue service on the line and the line was abandoned in 1948.

In 1872, the Shepaug Valley Railroad begins operation, putting Washington Depot (then known as the Hollow) within a day’s travel of New York City. Carrying both passengers and freight, the railroad runs along the river.

Litchfield County became a major exporter of fine cheese to other parts of the nation. Later, as technologies improved, Washington became a center for the production of fresh milk that was shipped to New York on the Shepaug Railroad.

Officially it was the Shepaug, Litchfield and Northern Railroad Company and it became a part (by lease) of the New York, New Haven & Hartford

In 1948, the Shepaug Valley Railroad ceases operation and tracks are removed. Delivery of freight by railroad to the Washington Supply Company is replaced by trucking.

The Shepaug, Litchfield & Northern RR was sometimes called the Great Northern by some of the men who worked on it, because in the fall of the year, they had trouble getting over the road when the leaves were falling.

There were many carloads of stone hauled at one time from the quarries at Roxbury. The stone for the Brooklyn Bridge came from these quarries. In later years, there was a big ice house built at Bantam Lake. As many as 27 carloads of ice a day were hauled during the summer.

At one time, it was intended to extend the Shepaug to Torrington or Winsted, but it was never built beyond Litchfield. Of course, nothing ever happened. In 1892, the N Y, N H & H leased the Hawleyville-Bethel branch to the Shepaug.

2 passenger trains a day each way went between Bethel and Litchfield. A freight train also made a round trip from Danbury, via Bethel, to Litchfield. Then in 1898, the New Haven leased the whole Shepaug.

Beginning in 1905, a thru train ran from Litchfield to New York. This train did a nice business for a few summers but by 1913 the automobile won. Then passenger trains were run into Danbury instead of to Bethel and the branch from Hawleyville was abandoned in 1911.

How to Find the Shepaug Tunnel

Now that the railroad is gone, the most popular thing about it is the tunnel.

Click HERE for detailed directions on how to find the tunnel (and what else you can see nearby).

In 1835 a rail charter was granted by the Connecticut Legislature to an enterprise known as the “Fairfield County Railroad.” The charter was established only to build a railroad between Danbury and Long Island Sound. Professor Alexander C. Twining of Yale University surveyed for a rail route in 1835 and recommended a route that is similar to the route the Danbury Branch travels today.

Renamed the “Danbury & Norwalk Railroad”, work began quickly on the new 23 mile line. In 1852, the D&N started operations and trains would make two round trips daily for passenger service. The Line did well financially in the first few years, especially for passenger service. The D&N sought an advantage in freight traffic by building a rail and ferry connection at Wilson’s Point in South Norwalk in 1882. That extension made the railroad an attractive business partner for other rail lines including the Housatonic Railroad and the New York, New Haven & Hartford. In 1886 a deal was struck between the D&N and the Housatonic Railroad, the Housatonic Railroad arranged a 99 year lease with the D&N. The key places for the interchanges were Danbury and Hawleyville in Newtown. Freight traffic was able to bypass Danbury, passing through Hawleyville and then into Brookfield. The New Haven then leased the Housatonic Railroad in 1892 after threatening to build a line parallel to the Housatonic’s New Haven-Derby line. The New Haven vastly improved itÍs rail infrastructure. The company electrified it’s lines along the shore to Stamford by 1907, but did not electrify the Danbury Branch until 1925.

The New Haven fell on hard times during the Depression. It had also made poor business decisions such as acquiring many unprofitable short lines railroads in it’s quest to dominate rail service. The Danbury Branch did well during WWII when fuel was rationed, but the New Haven never fully recovered financially from Depression when it declared bankruptcy. The company “de-electrified” the Danbury Branch in 1961.

In 1837 construction of the first 35 mile segment of track began. By 1840, trains were traveling between Bridgeport, via Newtown and Brookfield, northerly on to New Milford along the banks of the Housatonic River. The Housatonic Railroad reached the Massachusetts state line via the Berkshire Line in 1843. Promoters of the Housatonic Railroad (including P.T. Barnum) initially envisioned two roles for their new line: (1) serve the iron, marble, granite and lime industries and second, to form a water-rail route between Albany and New York City. Although the fledgling railroad experienced some financial problems early on, by the beginning of the 1850’s the business was steadily growing. In 1892, the line was acquired by the New York, New Haven & Hartford Railroad. It was in this period that the Housatonic’s north-south route from Danbury to Pittsfield, Mass. became known as the Berkshire Line. Although the railroad served adjacent industries and provided freight interchange, the Berkshire soon became best known as a passenger line that brought New Yorkers up to their country retreats.

The Maybrook Line running east-west thru the Greater Danbury Region was first envisioned by the Boston, Hartford and Erie Railroad as part of a rail line intended to link Waterbury, CT westerly to the Hudson River in New York State. This line was to supply important freight to New England, such as coal from Pennsylvania. It was to provide direct freight competition to the New York, New Haven & Hartford running roughly parallel to the south. The Maybrook Line was actually completed by the New York & New England R.R. in 1891 to link with ferries that took rail cars across the Hudson River in Fishkill, NY. By 1895 the New Haven controlled the NY&NE and the track that became the Maybrook Line from Danbury to Derby. The Maybrook Line was absorbed into the New Haven and at approximately this time the Poughkeepsie Bridge had been built, making the Maybrook a much more strategic thru route than in the past. Passenger service to Newtown and other Maybrook Line stations ceased in 1931 as the route became a freight only railroad. Penn Central acquired the assets of the New Haven in 1968, including the Maybrook Line, and ran freight service on it until 1974 when the Poughkeepsie bridge burned.

The railroad from Derby to New Haven was completed in 1871. It was a short line, 13 miles, but proved to be strategically valuable to rail companies such as the Housatonic Railroad. to the west. With it, the Housatonic would be able to parallel New Haven Line along the Connecticut shore. The Housatonic Railroad acquired the New Haven & Derby railroad in 1889. The Botsford extension opened in 1888 allowed a thru rail trip from New Haven, CT all the way to Pittsfield, MA. 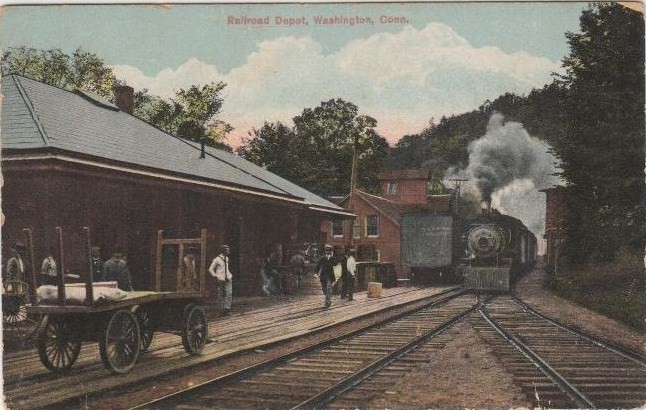 Picture of train station in Washington, Connecticut on the Shepaug Line.

From our postcard collection.