April 19, 1940 – Little Falls, New York, United States: The westbound New York Central Lake Shore Limited, running fifteen minutes late in rainy conditions, fails to reduce speed to 45 miles per hour at Gulf Curve near Little Falls, sharpest on the NYC System, and at 59 mph the locomotive derails, crosses two tracks and strikes a rock wall whereupon it explodes and nine cars pile up behind it. At least 30 known dead, including the engineer, and 100 injured in the this accident.

June 5, 1940
To the Commission:
On April 19, 1940, there was a derailment of a passenger train on the New York Central Railroad at Little Falls, N.Y., which resulted in the death of 26 passengers, 2 Pullman porters, 1 train porter, and 2 train-service employees, and the injury of 47 passengers, 1 Pullman porter, 2 dining-car employees, and 1 employee on duty. This accident was investigated in conjunction with the New York State Public Service Commission.

Location and Method of Operation
This accident occurred on the Mohawk Division which extends between Albany and Kirkville, N.Y., a distance of 136.76 miles. In the vicinity of the point of accident this is a four-track line over which trains are operated with the current of traffic by an automatic block-signal and automatic train-stop system; signal indications supersede time-table superiority. The main tracks from south to north are: No. 2, east-ward passenger; No. 1, westward passenger; No. 3, westward freight; No. 4, eastward freight. The accident occurred on track No. 1 at a point 2,875 feet east of the station at Little Falls. Approaching this point from the east on track No. 1 there is a series of curves and tangents followed, in succession, by a compound curve to the right 1,932 feet in length having a maximum curvature of l degree 52’35”, a tangent 1,193 feet in length and a 7 degree 24’curve to the left 856 feet in length. The derailment occurred on this latter curve, known as Gulf Curve, at a point 458 feet from its eastern end. The grade varies between 0.26 and 0.50 percent ascending westward a distance of 8,600 feet, and following this gradient there is a vertical curve a distance of 200 feet to the point of accident and 200 feet beyond.

Inv. No. 2423 New York Central R.R. Little Falls, N. Y. April 19, 1940
The track, structure consists of 127-pound rail, 39 feet in length, laid on an average of 24 treated oak ties to the rail length; it is fully tie-plated with double-shoulder canted tie-plates spiked with two rail spikes and two lag spikes per plate, and is provided with eight rail anchors and five gage rods per rail length; it is equipped with 6-hole toeless angle bars 36 inches in length, is laid on 20 inches of crushed rock ballast, and is well maintained. The rail was laid new in June 1939, and was spaced in August 1939. The superelevation of track No. 1 at the point of accident was 8 inches. The north rail of the spiral at the east end of the curve rose from level to a superelevation of 8 inches in a distance of about 200 feet. The gage varied between 4 feet 8-7/16 inches and 4 feet 8-9/16 inches.

Automatic signals 21421 and 21531, which govern westward movements on track No. 1, are located 9,046 and 3,086 feet, respectively, east of the point of accident. Signal 21421 is a 2-unit, color-light, searchlight signal; signal 21531 is a 2-unit, upper-quadrant, semaphore signal; both signals are approach lighted. The most favorable indication displayed by these signals is in accordance with Rule 281A, which provides:
Night Aspect Indication
Green-over-yellow Proceed Approaching Second
(Staggered) Signal At Medium Speed

Because of this indication, an engineman must operate the forestalling device in order to prevent automatic train-stop brake applications at these signal locations.

Medium speed is defined as: A speed not exceeding thirty miles per hour.

The automatic train-stop system is of the intermittent-inductive type and engines are equipped with forestalling devices. When a brake application is forestalled by an engineman, the train may proceed under his control in accordance with operating rules.

Rules for enginemen and firemen for the operation of intermittent-inductive automatic train-stop read in whole or in part as follows:

Rule 6. Enginemen must not forestall until after signal indication has been observed and is being obeyed.

Rule 7. Enginemen, after complying with Rule 6 may forestall at an inductor, to avoid the automatic stop brake application–
(a) When running forward with current of traffic at signal which displays indication other than “Proceed” or “Proceed at Medium Speed.”
* * *
Rule D-251, of the operating rules, reads as follows:
D-251. On portions of the road so specified on the timetable, trains will run with the current of traffic by block signals whose indications will supersede timetable superiority.
Time-table special instruction D-251 reads in part as follows:
D-251. MOVEMENT OF TRAINS WITH THE CURRENT OF TRAFFIC ON TWO OR MORE TRACKS BY BLOCK SIGNALS.
Between Croton-on-Hudson and Kirkville.
* **
The maximum authorized speed on track No. 1 in the vicinity of the point of accident is 45 miles per hour. A speed board bearing the words, “SPEED LIMIT, GULF CURVE, 45 MILES, TRACK NO. 1,” is installed on the south bent of the signal bridge located 3,086 feet east of the point of accident; it is attached to the bridge 10.38 feet higher than the rails and is lettered in black on a yellow background.
A flange lubricator is located on the north rail of track No. 1 at a point 134 feet east of the east end of Gulf Curve.
Mile Post 216 is located 396 feet west of the point of accident.
The weather was cloudy at the time of the accident, which occurred about 11:33 p.m.

Inv. No. 2423 New York Central R.R. Little Falls, N.Y. April 19, 1940
The employees killed were the engineman and the fireman, and the employee injured was the road foreman of engines.

Summary of Evidence
Road Foreman of Engines Bayreuther stated that he inspected engine 5315 before No. 19 departed from Albany; the engine was in good condition. The air brakes were tested at Albany, a running test was made soon after leaving that point, a stop was made at Schenectady, the brakes were used to control, the speed of the train at several points where there were speed restrictions, and in each instance the brakes functioned properly. Approaching the point of accident there was nothing unusual in the action of the engine, and the speed was 74 miles per hour. He said that he and the fireman called the indications of signals 21421 and 21531, which were displaying green-over-yellow aspects, and the engineman responded. Soon after the engine passed signal 21421 the engineman left his seat and examined the depth of water in the tender by opening a gauge cock in the left wing of the cistern and then resumed his usual position on the right seat-box. Between signals 21421 and 21531 the speed of the train seemed to be reduced as a result of the ascending grade. The engineman forestalled at both signals and the whistle in the cab sounded. After forestalling for signal 21531 the engineman made a brake-pipe reduction which did not seem long enough to indicate a proper brake-pipe reduction for the speed of the train and the distance to the point of speed restriction on Gulf Curve. The road foreman of engines said that usually a 14 or 15-pound, reduction is made to control the speed of a train approaching speed restriction points; becoming alarmed about the speed, he crossed to the right side of the cab and observed that the equalizing reservoir gauge indicated a brake-pipe reduction of only 11 or 12 pounds and the speed-recorder indicated a speed of 61 miles per hour. He warned the engineman that the speed was too great for Gulf Curve and instructed him to make a further brake-pipe reduction. The engineman did not answer but closed the throttle suddenly just as the engine entered the critical point of the curve; he did not seem to be ill, but rather in despair and mumbled something as though he realized something was wrong. The engine did not seem to hear heavily against the high rail; however, after the throttle was closed he thought the rear end of the engine started to leave the rail first and there was a jack-knife action at the connection between the engine and tender as though some added force caused the engine to become derailed and overturn. He thought that a speed of 52 miles per hour was the highest speed at which an engine could safely round Gulf Curve, but it was his opinion that if the engineman had continued to work steam in this instance the train could have rounded the curve. He thought that closing the throttle caused a change in force which resulted in the derailment. He said that it was the custom of the engineman involved to apply the air brakes near a point where a reduction in speed was required. The road foreman of engines thought that if a heavy brake-pipe reduction were made at signal 21531 or near it, a train of 15 cars could be controlled properly around Gulf Curve. 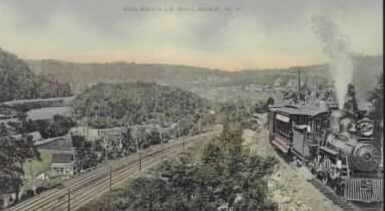 Gulf Curve in Little Falls also showing the line to Dolgeville; a 9 mile branch called the Little Falls & Dolgeville Railroad Co. which was abandoned in 1983

The yawning chasm, top photo, of the new channel for the Mohawk River at Little Falls is shown shortly before a section of the east coffer—dam was removed and water allowed to enter. The west dyke, in foreground, was then blasted away to permit the river to flow through the new channel. Lower photo, an overall view of the project is shown. A total of 135 men are working to complete the project by this coming Fall.