Charlie Gunn
Charles B. Gunn was born on April 10, 1918, and grew up in New Haven, Connecticut. In 1936 he began his forty-four year railroad career as a clerk with the New York, New Haven & Hartford Railroad Company. Over the years he worked for many departments of the company, including Accounting, Materials Accounting, Public Relations, Methods and Procedures, and the General Storekeeper’s Office. His only time away from employment with the company was when he served for three and a half years in the Army during World War II.

Gunn is best known, though, as the official company photographer during the years of the Patrick B. McGinnis presidency of 1954 to 1956. Gunn traveled with McGinnis on inspection trips of the railroad line. He took hundreds of photographs of the devastation to railroad property and towns along the railroad routes from the floods of August and October 1955. After McGinnis left the company in January 1956 Gunn’s position as official photographer was eliminated and he returned to work with other company departments, though he never stopped taking photographs of locomotives, stations, and other railroad-related scenes.

Gunn was still working for the New York, New Haven & Hartford Railroad Company when it collapsed and emerged as a part of Penn Central on January 1, 1969. Penn Central soon disintegrated to become Conrail and Amtrak.

Gunn retired in 1980 but continued to work as a professional photographer of weddings and church events and as an active promoter of the history of southern New England railroads. He regularly attended railroad shows and sold prints of the photographs he produced for the New York, New Haven & Hartford Railroad.

I found a bunch of photographs from a long time ago. Some of them were from Charlie Gunn which I purchased from him at train shows in Connecticut. I have always been interested in “head end” trains , so a “rider car” photo from him really interests me. Incidentally, many of the “Connecticut Stations” photos I have where bought from Charlie. 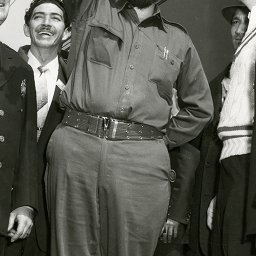 See the railroad collection at University of Connecticut