When was the West Shore abandoned?

Places to find New/Recent Abandonment Proposals on the Internet

1) http://www.trainweather.com/aban.html Most STB (Surface Transportation Board) abandonment filings between 1999 and present are listed by year. You can then use the docket numbers or location information to search for additional information if needed, or find the full text of each abandonment from other web sites.

2) http://www.stb.dot.gov/decisions/readingroom.nsf/WebServiceDate?openform Enter a railroad company, county name, city name, etc. in the search box to list abandonment documents for that location/company. I do not know the exact date range that this database covers, but it’s at least 1994 to present. Note that more than just abandonment filings are listed, so you may have to sift through the various documents that come up. Links to open each document are along the left-hand side of the page.

So what would a “revised” rail line look like?

To begin with, the line from Maybrook to the Hudson River is gone. Railroads that previously entered Maybrook can reach the Hudson River and head up the old West Shore to the proposed bridge at New Hamburg. But the old Poughkeepsie Bridge is no longer in service, as well as the tracks to Hopewell Junction. At Marlboro, trains would take the old New York Central Hudson Division to Beacon, New York. Yes, with both Metro North and Amtrak using the Hudson Line, it may require an additional track.

From Beacon trains would travel the Beacon Line over the Housatonic Railroad to Derby-Shelton, Connecticut. Trains would go to Cedar Hill Yard. Some traffic may go to Long Island. With traffic revitalized, other trains will even go to Waterbury!

No, it is not ours! It is very comprehensive and professional.

It is written by professionals, not railfans. Lots of really neat stories about the old railroads. Lots of great links too!

All about Metro-North Railroad

Tyler City Station
a pleasant and informative cyber-destination and a starting point for those interested in the history of railroads. The focus will be on those in southwestern Connecticut, but we may take a side track into other local historical topics spinning off from railroads in this and possibly in other geographic areas as well. The important role that the railroad played in the development of this state and this country can hardly be overestimated.

Other Abandonments in New York State

Other railroad abandonments interesting to me because they relate to areas I have written about. Courtesy of trainweather.com

The data covers the 48 contiguous states plus Hawaii.
The mileage was derived by computing the length of each line and summing by owner mark and status. This process may have resulted in significant cumulative errors. USE AT YOUR OWN RISK.

Copyright 1999 James R. Irwin
Permission is granted to copy and distribute this listing provided that this notice, the citations, and the copyright are included. 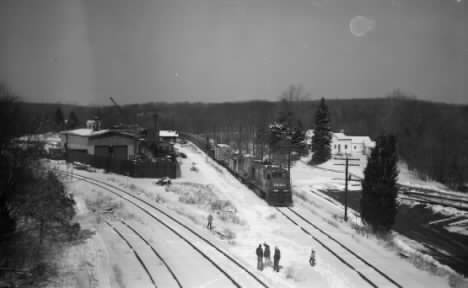 Removing the Maybrook Line tracks in 1983

Photo by the late Austin McEntee

Nine years after the big bridge in Poughkeepsie burned the tracks of the Maybrook Line were removed. This photo shows the last train on the line picking up the sections of rail as they were torn up. The rails were in section as much as a quarter mile long. They were winched onto a set of special train cars with racks to fit the rails. This was the very last train to pass over the Maybrook Line. When it was gone there were no more rails.

A group of dedicated rail fans were braving the winter cold to witness the sad events. After 90 years of service the Maybrook Line will fade into the history books. There will be no more trains but Dutchess County purchased the abandoned roadbed with the intention of building a north south highway but those plans did not work out. Instead the County will use the property as a utility corridor and bury water lines under the old ballast. The plan also includes paving it to form a hiking and bicycling “rail trail” for public use. The scene in this photo will be the Hopewell Junction end of the rail trail with a parking area. The depot in the distance is being restored to become a museum and educational facility for the town. There may not be any more trains on the Maybrook Line but a bit of Hopewell Junctions railroad history will be preserved in the old depot.

Connecticut’s Farmington Canal was converted to a railroad by 1848. The road was named the New Haven & Northampton, but has always been called the Canal Line. The road’s first terminal in New Haven was between Temple Street and Hillhouse Avenue.