Rutland joins just past Chatham on the Boston & Albany. goes one stop to Ghent then enters Harlem Division. No indication of schedule for train. Guess it sort of blended in, went to Mott Haven, then down the West Side.

Did Rutland had trackage rights on the B&M to Troy?

No, the Rutland didn’t have trackage rights over the B&M until the Chatham Subdivision was abandoned and they started running via B&M Troy NYC Rensselaer B&A Chatham. That agreement was between the Rutland Railroad and the B&M (and NYC), and it died with the Rutland.

Before that, the only Rutland operation to Troy was their passenger service, but they were actually B&M trains operated with Rutland crews and equipment as soon as they crossed the state line (and property line) at White Creek, NY. The B&M collected the revenue for that part of the trip between White Creek and Troy.

That was an interline agreement, and technically not trackage rights. The expenses for the Rutland (and equalization of crew miles under the union agreements) were made up with B&M operating Rutland trains.

Milk traffic on the Rutland Railroad made up a good share of revenue in the 1930’s and ’40’s.  The O&LC (Ogdensburg & Lake Champlain) or Ogdensburg sub-division was the beginning point for the milk train that rushed this traffic to the Boston and New York City markets.  Train No. 8 would leave Ogdensburg at 6:45 a.m. making milk pickups at the following stations:

During the steam era just about all the classes of Rutland steam power were used on the milk trains, with the 70 and 80 class engines seeing the most service [photos].  By 1952 milk trains No. 7 and No. 8 (the O&LC portions of the “Milk”) had become diesel powered and then in turn became mixed trains because of decreasing milk shipments.  During the diesel years, 400 class units were used.

No. 8 was scheduled to arrive in Alburgh at 12:45 p.m.  However, because of the varying milk car switchings, No. 8 frequently missed the 12:45 p.m. arrival time.   The train crew worked between Ogdensburg and Rutland except for the swing man (brakeman) who got off at Alburgh and would return on No. 7 to Ogdensburg the next day.   No. 8 became No. 88 at Alburgh.  It went to Rutland where a new crew would take over.  At Rutland the train was split: No. 88 became No. 156 to Bellows Falls with the Boston cars while No. 88 went to Chatham, NY where a connection was made with the New York Central Railroad for delivery to New York City over the Harlem Division.

On the return trip, the trains ran as No. 159 Bellows Falls to Rutland (except on Sunday; No. 167 on Sunday); No. 83 Chatham to Rutland; No. 87 Rutland to Alburgh; No. 7 Alburgh to Ogdensburg.  No. 7, which was due out of Alburgh at 3:10 p.m., would first back the train of empties into the Alburgh Lakeside Ice House for the ice during the summer months.  The crew and ice house workers would place the ice in the ends of the cars for icing on the return trip the next day.  During the winter months steam heat was used to keep the milk from freezing.

The milk train also carried passengers. A coach or combine was used for this purpose. The combine usually worked between Ogdensburg and Rutland, going with the crew. Three cars were available for such use and were numbered 253, 255, and 256. Combines 255 and 256 received the Rutland yellow and green paint scheme in their last few years of revenue service. (The 700 series steel and wood coaches were used both on the main line and on the O&LC).

At Norwood, NY No. 8 would make connection with the New York Central passenger train to Massena.  If the Rutland was a little late the NYC would wait up to 15 minutes for No. 8.  The milk trains also carried a baggage car and picked up and set out baggage and express along the way between Alburgh and Rutland.

One early morning in May of 1948, Preston S. Johnson found Rutland Ten Wheeler #71 ready to start from Ogdensburg, NY with train No. 8 the “Milk.”

Rutland Ten Wheeler #72 gets the second section of train #88, the southbound “Milk,” underway from Burlington, Vt. on a cold February 18, 1947.   This equipment originated in Ogdensburg, N.Y.
Photo by H. N. Proctor – Collection of James R. Dufour

TIMELINE OF THE RUTLAND MILK

Preston Johnson lensed this still-life of the Ogdensburg, NY engine house in May of 1948.
Collection of Wayne D. Hills 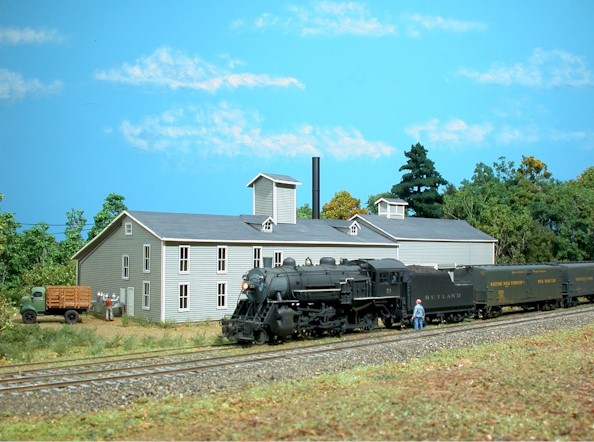 Pictured above is yet another diorama built by Lou Sassi for his upcoming Kalmbach book. In this scene, Rutland Ten Wheeler No. 74 is getting ready to switch the Grand Isle Creamery. The locomotive and the Pfaudler milk cars are brass models imported by Overland Models in the 1980’s. They were painted by Lou.

Lou based his drawings for the creamery on photographs of the model of the same building on the layout at RPI. He had Rich Cobb scratch build it. Martin Collard scratch built the stake body truck.

WORKING THE MILK
WITH JOHNNIE McKEAN
by Steve Mumley

Note: This account was originally published in Volume V, Part 2 of Bob Nimke’s series of books “The Rutland 60 Years of Trying.”  It is re-published here with the kind permission of the author.

For more information on the Rutland’s milk trains, have a look at another of Steve’s capsule histories: “Milk Train.”

The following information was taken from Conductor John McKean’s Record Book. It records the crew and consist of train No. 8, the Ogdensburg, NY-to-Alburgh, VT mixed train.  The average day would be from six to eight hours and would earn a trainman about $15.00 to $20.00 depending on overtime.  New York State law required the additional, third (“swing”) brakeman, who would get off at Alburgh and return to Ogdensbug the next day, working on No. 7.  The rest of the crew worked through to Rutland.  One brakeman would most likely have been in uniform and worked the coach or, in this case, the combine.

End of the Troy Union Railroad

The only reason for retaining the Troy passenger station at the bitter end was the remnant of B&M service from Boston with one or two Budd RDC’s. The NYC and D&H had the alternative of using Albany as their passenger interchange, and actually it switched back and forth between Albany and Troy for individual trains over the years. The B&M had nothing but Troy.

The D&H preferred Troy over Albany, because the distance from Colonie Shops (the Capital District locomotive service point and crew HQ) was shorter to Troy, and then they didn’t have to run the North Albany Yard Engine to Albany to handle the occasional passenger switching. The Troy Station Switcher (NYCRR crew) was in the station anyway. I don’t think the individual railroads paid for it per move, just a on a fixed percentage.

NYC preferred Albany, because it avoided running light engines the longer distance between Troy and Rensselaer, their locomotive service point, if they didn’t come back with a train.

The D&H paid NYC to use the upper level at Albany on a pro-rata basis, but, all three railroads that owned the Troy Union RR paid a fixed percent of the operating expenses. NYC paid 50%, D&H and B&M 25% each, because NYC took over the ownership of two predecssor RR’s – the Troy and Greenbush and the Troy and Schenectady. The Rutland had no ownership – they operated as B&M trains between White Creek and Troy.

The passenger station was demolished as soon as the last B&M train left town, mostly to avoid the high property taxes levied on railroad property in New York State. The Troy Union RR employees once said, only half in jest, that they knew the end was near when they put a new roof on the station. That was usually the kiss of death for any railroad building.

A serious problem that always plagued Troy was the number of highway grade crossings in the city. Every switching move blocked Fulton Street or Broadway, and the TURR needed about ten crossing watchmen per trick, or a total of more than 40 for the 24/7 passenger operation.

As for the demolition of Troy Union Station, the last passenger service left town in January of 1958 and it was demolished by the end of the summer that same year. So, no, there was never a post-classic- era shack.

Probably the reason Troy lost its direct passenger service relativley early is because it wasn’t far from more-than-adequate remaining service in Albany (7 miles, and with good local transit connections) . The cost saving from shutting down TUS was probably enormous.

Around 1959 D&H and NYC had brought running B&M to Albany, but they couldn’t make an agreement with the operating brotherhoods to allow B&M crews to run to Albany. It wouldn’t work out if a D&H crew had to take the train over that distance. The B&M wasn’t about to put any more money into maintaining that service west of Fitchburg, and this was another good reason for them to dump it.

Either way, the B&M would have had to either run via TURR to the NYC at Madison Street or to the D&H via the Green Island Bridge, and they would have still needed most of the TURR with all of its crossings, and the Green Island Bridge. A route via Mechanicville would not have worked, either. All three railroads wanted to be shed of the entire TURR, not only the station, and the best way to get regulatory approval was to let the expenses pile up and then dump the whole thing. The only fly in the ointment was the Rutland operation, and when that went away in 1961 the fate of the TURR was sealed.