A new commuter line was built through Westchester and Putnam counties in 1879 and 1880.

It was a listing of summer resorts and excursion routes that were available. The book not only listed the routes and prices, but contained maps and vivid descriptions of the resorts. This undertaking was engineered by the Central’s advertising guru – George H. Daniels. Daniels was the road’s General Passenger Agent and ranks as one of the greats of American advertising. This ex-patent medicine salesman has been credited with turning the Thousand Islands into a resort area. 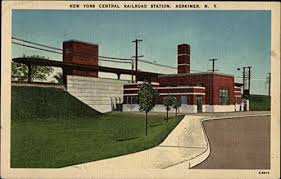 (This article is based on a similar article published in 2015 in the “CENTRAL HEADLIGHT” of the New York Central System Historical Society. It was written by the Late Douglas McIntyre Preston.)

It took over forty years of contemplation, frustration, and at last construction before the village of Herkimer, New York finally obtained a new passenger station. The New York Central’s project was to relocate its four-track main line in Herkimer, and thus eliminate seven dangerous crossings in the middle of this village and provide a modern passenger station. Planning and discussions among the railroad, the village, and regulators had dragged on for decades. 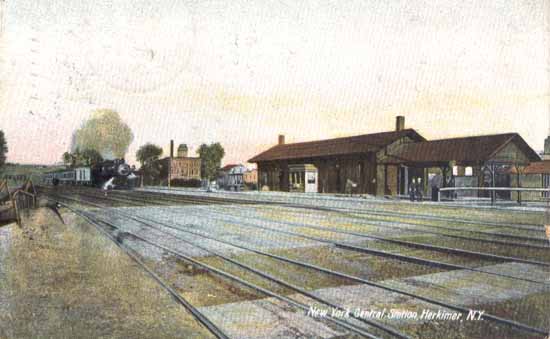 Herkimer had always been on the New York Central. The Herkimer, Newport & Poland Narrow Gauge Railroad headed north of the village beginning in 1882. In 1891, Dr. William Stewart Webb acquired it, standard-gauged it, and it became the Mohawk & Malone (M&M) through the Adirondack Mountains.

Across the Mohawk River from Herkimer, the New York, West Shore & Buffalo established its main shops in Frankfort. Later when NY Central took over, the shops became home to Union Fork & Hoe. The massive brick shops were demolished a couple of years ago after a huge fire gutted the abandoned complex.

And yes there was a trolley connection too.

The NY Central-controlled Utica & Mohawk Valley interurban linked Herkimer to Little Falls on the East, and Utica and Rome on the West. Concrete arches still span West Canada Creek. One could also go from Herkimer South to Cooperstown and Oneonta on the Southern New York Railway. By 1907 one could go to Syracuse on the Oneida Railway “Third Rail” over the West Shore from Utica.

By the early Twentieth Century, the Central’s four-trackmain divided Herkimer into two distinct “sides”. Manufacturing plants, smaller homes, Italian and Polish immigrant neighborhoods, and Roman Catholic churches predominated on the “South Side” between the railroad and the Mohawk River. Interurban tracks ran through the same side, and the trolley station lay immediately south of the Centrals passenger station, itself south of the Water Level Route.

Other factories stood on the “North Side” along with the sizeable brick New York Central freight house and the small M&M roundhouse and yard. But north of the tracks one also found the village and county government buildings along with most of Herkimer’s retail stores, fire department, high school, hospital, Masonic temple, historical society, park,protestant churches, and synagogue. Herkimer’s newer and larger homes were also located north of the tracks.

As a much smaller community only about fifteen miles east of Utica, with its large Union Station, Herkimer saw multiple sections of the “Great Steel Fleet” thunder through town at seventy miles per hour. Few trains stopped in Herkimer, so there were 100-car freights around the clock also. Safety was an issue also. From 1904 until 1939, the local newspaper tracked “over 30 killed”. This did not count any from 1836 (arrival of the Utica & Schenectady Railroad arrival) until 1904. The same newspaper published a story in 1939 “LOCAL FIREMEN GLAD CROSSING HAZARD TO GO”. Herkimer firemen have come to look upon the grade crossings as barriers which at any time may be clamped down in front of their screeching trucks when seconds in time saved would mean the savings in life and property. The fire insurance rating board threatened to raise rates in Herkimer unless they put another fire station south of the tracks.

The project plans for the grade crossing elimination project and new station were approved February 4, 1941; but it was not until April 5, 1943 that the relocated passenger tracks and new station were opened. Freight tracks 3 and 4 opened about a week later. Passenger service lasted only until 1962. The station still stands but used by a local business. Tracks 1 and 2 now carry four Amtrak trains each way, none of which stop in Herkimer; plus up to sixty CSX freights. Brush grows where tracks 3 and 4 once ran.