Dr. Plimmon H. Dudley, the New York Central Railroad’s expert on rail metallurgy, would also accurately predict the weather. He was considered the “scientist of rails”. He died in 1924 at age 81. He had joined the New York Central in 1880 and had lived in the Hotel Commodore since it was built. 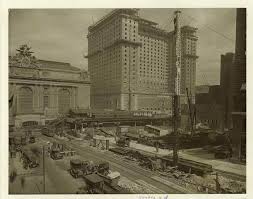 INTEREST IN FLAWLESS RAILS:
Steel men expressed great interest yesterday in the announcement made by President A.H. Smith of the New York Central Railroad that the road’s staff of specialists under the direction of Dr. Plimmon H. Dudley had discovered the cause and remedy for the hidden flaws in steel rails.

HOW ONE MAN HELPED MAKE RAILROADS SAFER; Inventions of Dr. Plimmon H. Dudley Point Out Roadbed and Track Defects and Make Steel Rails Impervious to Cold
By JOHN WALKER HARRINGTON.
February 17, 1924,
EVERY one of us who slips into a Pullman berth at night and wakes up safe and sound in a distant city owes a debt to Dr. Plimmon H. Dudley’s half century of the study of the steel rail. As his eighty-first birthday approaches, science and transportation are preparing to do him honor.

Gifts can become unworkable in many ways. Consider the Dudley Professorship of Railroad Engineering at Yale. The chair was created in 1923 with a $US152,679 gift from Plimmon H.Dudley, a New York Central Rail engineer.

His express desire, he said, was that his research into railway safety be continued, in particular in connection with the development and improvement of designs of rails, roadbeds and crossties.

But railway engineering lost its lustre as a hot academic topic. And the professorship sat vacant for more than 70 years.

“I was kind of stumped as to what to do with this chair,” Yale’s president, Richard Levin, admitted.

Then Yale realized that the steam engines and wood ties of yesterday had been replaced by today’s magnetic levitation and superconductivity. So since 2002, Stephen Morse, an engineer who has studied urban transportation and switching strategies for the control of uninhabited vehicles, has been the Dudley Professor of Engineering at Yale.