There didn’t seem to be a whole lot of on-line industry along the NJ Jct line. One of the roads interchanged to along the line was the tiny Hoboken Shore RR. This railroad ran in the area where NYC-EL-HSRR all came together, just about on the Hoboken-Weehawken border. You can see where the tracks had been from the new Light Rail but everything has been torn out. And what was once a pretty big Erie yard in Weehawken seems to have vanished without a trace.

I always visualized National Junction as a large facility but on the way from Weehawken to Jersey City there was a little sign on a steel post that said “National Junction”. CNJ delivered a coal train for PSG&E at North Bergen every other day at least and there was alot of traffic.

The beginning (Milepost 0) was at the southern end of the Weekawken Tunnel.New York Central had a large yard there at one time, which was why it bacame Milepost 0. It is across the Hudson River from the Empire State Building where Alexander Hamilton and Aaron Burr had their famous duel. In 2002, the track through the tunnel from North Bergen yard was severed for a new New Jersey Transit light rail line.

There is a “new kid on the block” now: New Jersey Transit’s light rail line

The New Jersey Junction Railroad Company was incorporated February 27, 1886, under the laws of the State of New Jersey. It owned a railroad, connecting the CSX River Division (former West Shore Railroad) with the trunk lines terminating at and near Jersey City, extending from Weehawken to a junction with the former Pennsylvania Railroad at Jersey City, and a branch to a junction with same road near Harsimus Cove. Its railroad and property were leased, with the consent of the Legislature of the State of New Jersey to the New York Central and Hudson River for one hundred years from July 1, 1886, with the privilege of a further term of one hundred years, at an annual rental of interest at four per cent on its outstanding bonds. The road was opened for through business for freight trains in May and for passenger trains in June, 1887.

The New Jersey Shore Line Railroad Company was organized February 25, 1886, and received a charter dated March 2, 1886, from the Legislature of the State of New Jersey, empowering it to construct and maintain a line of railroad from a point in the township of Union, Hudson county, to a point in the town of Harrington, Bergen county, a total length of about fifteen and one-half miles. A portion of the projected railroad was constructed in the year 1910 from a point in the yard of the West Shore Railroad at Weehawken to the tracks of the New York Erie at Shadyside, a distance of 85/100ths of a mile, with side tracks measuring 26/l00ths of a mile, and opened for traffic March 14, 1911, the first movement of cars taking place on May 16, 1911. The balance of the projected route was formally abandoned and the money deposited with the State of New Jersey as security for the completion of the work was returned to the company. The capital stock was owned by the New Jersey Junction

The Pennsylvania Railroad Harsimus Branch Embankment carried freight across six blocks of downtown Jersey City to the Railroad’s Harsimus Yards, located on the Hudson River directly across from Manhattan Island. The embankment, which fronts and runs parallel to Sixth St., consists of six segments, each approximately 400 feet long and 100 feet wide

Constructed in the period 1901-1905, the Harsimus Branch Embankment was a major component of the once predominant railroad landscape of Downtown Jersey City. It was connected to the Pennsylvania’s Main Stem by an elevated, two-track line from which it branched near the Waldo Ave. Yard. This freight line connected to a spur of the New Jersey Junction Railroad just before reaching the embankment, allowing Pennsylvania waterfront freight to be moved north at the base of the Palisades to other rail systems.

Night and day, steam powered locomotives chugged upon it above the streets of Jersey City. Heavy traffic continued into the early post World War II period. Much of the cargo was produce and cattle headed for slaughter at waterfront abattoirs. Soon after World War II, competition from trucking and containerized shipping rendered much of Jersey City’s railroad infrastructure superfluous. Operated less intensely after the demise of the Penn Central by Conrail, the embankment carried (if only to reverse direction) lengthy diesel powered “piggy back” container trains as recently as the early 1990s. 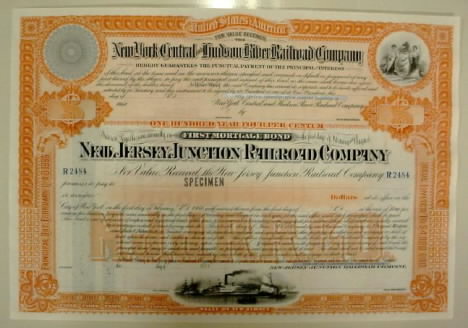 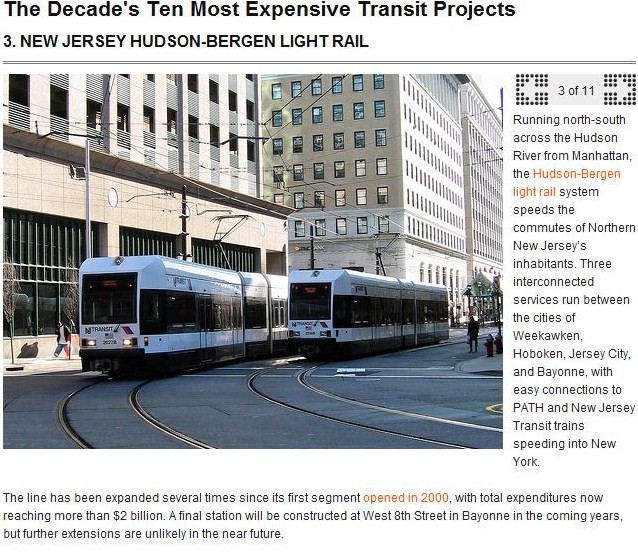 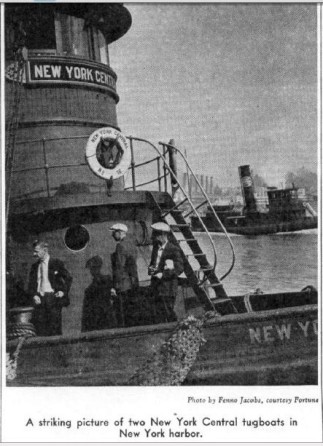 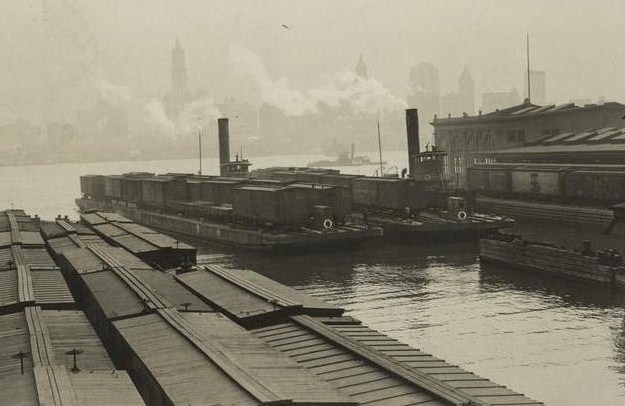 Here’s another view of a Hudson River car float. From my collection. Date and source unknown.